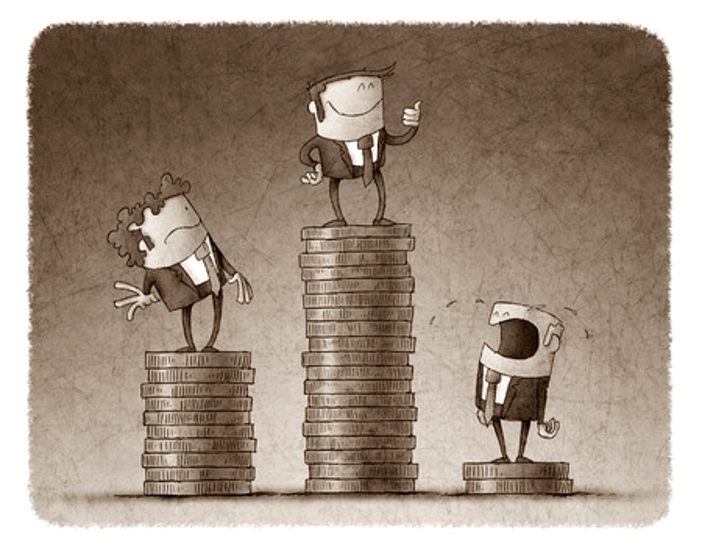 Social and economic inequalities were always present in some form during the history of mankind. Distribution of income and wealth is one of the many intensively studied topics in the interdisciplinary field of Econophysics. These problems, involve a large ensemble of agents interacting in a complex manner, therefore the methods and models of statistical physics elaborated for such kind of systems are nicely applicable. The main universality describing quantitatively the observed inequalities was described by the Italian economist Vilfredo Pareto more than 100 years ago.  This is the famous 80–20 Pareto law, according to which in a given society 20% of the population owns roughly 80% of the total wealth. This is also valid for the income. The Pareto law is a consequence of the “heavy-like” tail of the income and wealth distribution.  While for the rich class of the society a power-law type distribution is valid for wealth and income, for the middle and poor class of the society an exponential distribution fit well.   Although, in the last decades numerous models were designed to describe the whole range of income and wealth distributions in a unified manner, none of these models were able to reproduce the right stationary distributions that fits the real word data.

Recently, a powerful class of mean field type models was proposed by Biro and Neda in the framework of a UEFISCDI sponsored complex research grant. The model is based on a master equation describing stochastic processes characterized by local growth and global reset (LGGR model). The particularity of the model is that by considering the proper forms of growth and reset rates, it is able to explain many of the stationary distributions that are typical in complex systems.

PhD students Istvan Gere and Szabolcs Kelemen from the Physics Department of the UBB coauthored recently two interesting studies where the LGGR modeling framework was applied with success to describe in a unified manner the whole distribution curves for income and wealth. The LGGR type model used in these studies is based on a verified preferential growth hypothesis (according to the well-know “rich get richer” principle), and a smart-reset rate allowing income of new actors in the small and middle income/wealth categories and leaving the system at high income limit.  Another novelty of these results, is that the proposed analytically treatable theory is able to capture also the negative wealth (dept) region, unaccounted in earlier theories.

A short video abstract on this research is available at: https://www.youtube.com/watch?v=jqmSO7Iu08Q

For further information about these results please consult the two articles, published in the WOS journal Physica A: Statistical Mechanics and its Applications:

Vitamin B12 and hydrogen peroxide secret unveiled by UBB researchers

Conference of the National Council of Rectors at Babeș-Bolyai University