PARLIAMENTARY ELECTIONS, IF CORRECTLY UNDERSTOOD, MAY RELAUNCH EDUCATION, AND LATER THE COUNTRY ITSELF!

The Rector of Babeș-Bolyai University in Cluj-Napoca (UBB/ BBU), Prof. Daniel David, is encouraging people to carefully analyse the academic component in the political parties’ programmes for the December 2020 Parliamentary elections – programmes that will be completed and made public the following days.

During a recent discussion held between the representatives of the GUILD – the organisation of some of the most important European “world-class” universities that UBB is part of – and the representatives of the European Commission, a meeting during which there was an analysis of the academic policies/mechanisms and the policies of academic finances at the level of the European Commission, the UBB rector brought into discussion the issue of models existing within the Commission as opposed to those found at a national level.

“Considering the current state of the country’s academic system and our protection of the development, Romanian academic policies/mechanisms don’t have to imitate the European Commission policies/mechanisms, but they do have to be compatible with and able to be integrated into the latter. For instance, many European countries have a solid supply of knowledge derived from advanced research (discovery/fundamental/basic/exploratory research), and a strong core of human resource that constantly fuels this supply, allowing them to invest massively in knowledge transfer for innovation and/or generation of knowledge in interaction with the innovation process. In Romania, neither of these components is truly competitive, and so we don’t have much to transfer innovatively; we may have the potential for some incremental innovations, but that is not the case for the disruptive ones, generating new markets and changing paradigms. Therefore, the country’s investments must be done wisely, by also at the same time in support of the innovation and its generating engine – advanced exploratory research and human resource. Otherwise, we will again squander the national and European resources on innovative Lăstun-like approaches (which I have wrote about before – see: http://www.romaniacurata.ro/cercetarea-romaneasca-astazi-mergem-spre-un-nou-lastun-like-technology/), thus becoming a scientific/technological colony. I’ve talked about this before, but now I found these matters to be discussed again on an European level, and in the country we can refer to them in more pragmatic terms, in the context of the upcoming Parliamentary elections of December 2020. And so, let us analyse the programmes proposed by the political parties and act accordingly!”, said Prof. Daniel David, summing up the implications of the discussions.

The UBB Rector showed in various national and international analyses that if we do not level higher education and research within the national academic environment, we cannot hope for a rapid and healthy growth of this country. ”This is because no matter the intelligent strategies in various fields, experts are trained in the academic environment, so if we don’t train them adequately, they won’t be able to develop their respective fields and bring them up to date. Also, in the academic environment we train teachers to educate our children; if we do not train them well, children will be under-educated. In conclusion, the academic environment is the core that generates the country’s modernisation, or the core that condemns our present (socio-economic environment) and our future (generations trained in the pre-university system) to obscurantism/ backwardness. Any rational, well-intended person understands, in this context, that before making plans to modernise the country, we must first modernise education, and within it the academic environment first (higher education/research); it’s not about choosing depending on preference or interests, be they legitimate; it’s about vision, strategy and rational tactics, taking from the causality through the action where effects may appear sooner, with minimal investments, and going on to having a major and multiplied impact!” 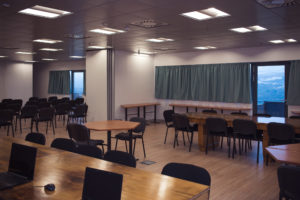 First European Doctorate Certificate at the Faculty of Political, Administrative and Communication Sciences