Vitamin B12 and hydrogen peroxide secret unveiled by UBB researchers 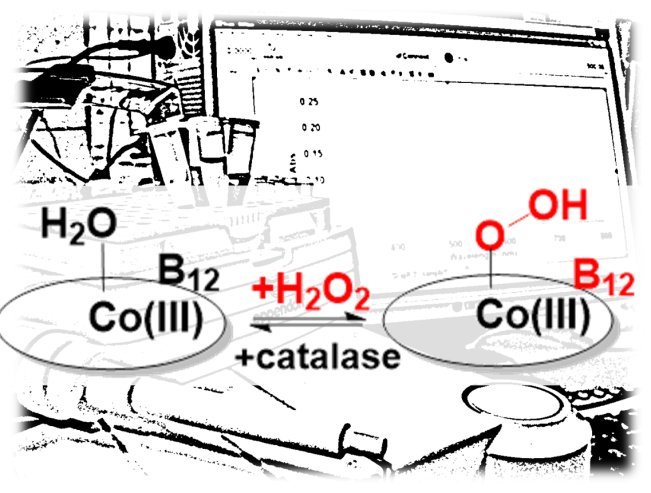 Vitamin B12 (cobalamin) and hydrogen peroxide have been known and studied by researchers for longer than most other molecules in our bodies – but were never shown to react with each other. Yet, B12 contains a transition metal (cobalt), and transition metals are generally known to react with hydrogen peroxide in complex and sometimes dangerous processes. Metal-peroxide interactions are important in the process whereby liver “detoxifies” foreign toxic compounds (with iron-containing cytochrome P450 enzymes), or in the function of the immune system (with iron-containing myeloperoxidases), or in the maturation and elastic properties of collagen (with copper or iron enzymes), or in oxidative stress and aging in the mitochondria. Cobalt is also known to bind peroxide in biological systems – as seen for example in the well-studied complex of the anticancer drug bleomycin with cobalt and peroxide (also previously examined by UBB researchers). Work by UBB PhD student Maria Lehene, together with collaborators from the Chemistry and from the Physics Departments at UBB and external collaborators from the Ivanovo State University of Chemistry and Technology in Russia, now shows that B12 and hydrogen peroxide form a stable and reversible complex.

Vitamin B12, like many metal complexes in living organisms (hemoglobin as the most common example), is a colored substance – which means that its chemical reactions can be easily monitored by the way it absorbs visible light (the so-called UV-vis spectroscopy). When Maria Lehene mixed B12 with peroxide, almost nothing appeared to happen to the UV-vis spectrum of cobalamin. This is where most researchers would have stopped. However, a very small change was still visible. Could this very small change be due to an impurity, or was it really a chemical reaction of B12? To answer this question, help from specialists in infrared light (resonance Raman spectroscopy) and NMR spectroscopy was recruited – and this was where the cobalamin signals lighted up and showed clear evidence for a complete reaction with peroxide. Interestingly, when a peroxide-destroying reagent was added to the B12-peroxide mixture, the vitamin returned to its natural state. After also checking the nature of the product using mass spectrometry and chromatography, and after simulating the electronic structure using quantum chemical methods, and then finally measuring the rate of the reaction and the affinity between the two partners, the authors concluded that indeed B12 forms a stable complex with hydrogen peroxide.

Several other vitamins react with peroxides either directly or indirectly. Vitamin C and vitamin E are the most common examples: they are consumed in order to destroy hydrogen peroxide and thus prevent oxidative stress in our bodies. B12 is thus a new example of a vitamin-peroxide interaction – but this time with no effect on either of the two partners. “The biological functions of B12 do not involve hydrogen peroxide, but it is interesting to see how this vitamin can resist an omnipresent stress agent such as H2O2. Last but not least, there is maybe a lesson to be learnt from the fact that the B12-peroxide reaction was almost undetectable by the most common experimental method normally employed on biological metal centers – UV-vis spectroscopy: one may wonder how many other reactions of B12 have gone undetected due to similar reasons” – concludes lead UBB author, Prof. Radu Silaghi-Dumitrescu.

This research was published on 12.08.2021 in the journal Inorganic Chemistry as:

Conference of the National Council of Rectors at Babeș-Bolyai University