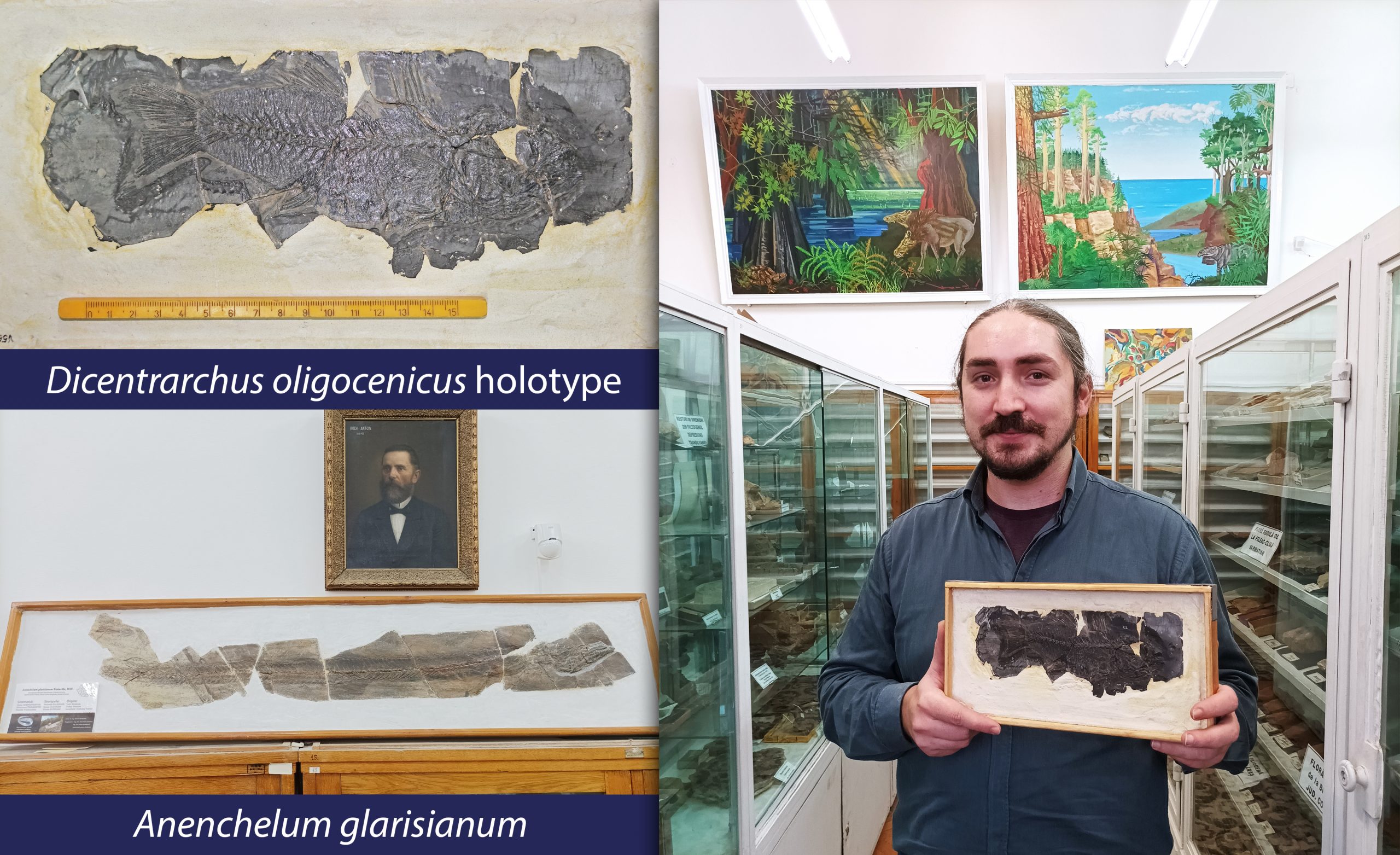 During the field campaigns for his Bachelor’s Degree back in 2012, doctoral student Marian Bordeianu has found some new fossil-rich outcrops on the Coza Valley from Vrancea County, that yielded many fossil fish remains. While trying to deepen the knowledge on these fossil outcrops in 2015, during his Master’s Degree campaigns, he found a rather unusual fossil that didn’t match any already known taxa from Romania. Together with his former mentor on fossil fish, Dr. Ionuț Grădianu from the Natural Sciences Museum of Piatra-Neamț, and with Professor Vlad Codrea, he managed to publish recently their findings of a new species of fish that also represents the oldest of its kind at a family level, from Europe.

Moronids or sea basses are a family of brackish, freshwater, and marine coastal areas perciform fishes, commonly found in the Atlantic and Gulf of Mexico, Mediterranean and Black Sea, and northern Africa. The Moronidae consists of two genera, Morone and Dicentrarchus, with six extant species (four in North America and two in Europe). The extant moronids have been intensively studied due to their growing economic importance in the fisheries across Europe, Northern Africa and Northern America. However, data about the extinct forms of this fish family is scarce, especially in Europe.

The new species referred as Dicentrarchus oligocenicus brings new insights about the evolution of the extant European sea basses, and widely contributes to the knowledge on the Paratethys Sea from around 33 million years ago, and its connections with the former Atlantic Ocean. The species is represented by an almost complete skeleton that was named after the geological age (Oligocene) of the formations in which it was found.

The discovery of the fossil fish was published in January 2022 in Historical Biology Journal. The paper also discusses about a formerly considered Morone major specimen from the Natural Sciences Museum of Piatra Neamț, a fish that is now declassified from the Moronidae family due to the lack of morphologic characters, and that is now reclassified as Percoidei incertae sedis.

This research represents the second step made in the study of the fossil fish fauna from Vrancea Half-Window. Another study on the faunal assemblages from the same fossil locality was made back in 2018 when the PhD student, together with the previously mentioned collaborators and with Dr. Nicolae Trif from Brukenthal National Museum of Sibiu, have published the first fossil discoveries. These latter ones refer to seven species (one shark and six bony-fish) that do not have such a great systematic value, being already known from other Romanian Oligocene localities. However, these discoveries are of great museological importance due to their preservation, one of them representing the most complete large fish of its kind from Romania (Anenchelum glarisianum = almost 1.35 meters long).

The new holotype, as same as the previously described fish fauna, can be seen in the Paleontology-Stratigraphy Museum of Babeș-Bolyai University. These discoveries reward the great passion from Marian’s behalf, since at a young age, during his Bachelor’s and Master’s studies he spent many weeks, every year, to do the systematic diggings in Putna-Vrancea National Park – a place inhabited by many bears. The fieldworks for these explorations were done mostly by working alone, while spending the nights in the tent, next to the stream, in the middle of the wilderness.

More about this study can be found here:

More details about the previous study can be found here: