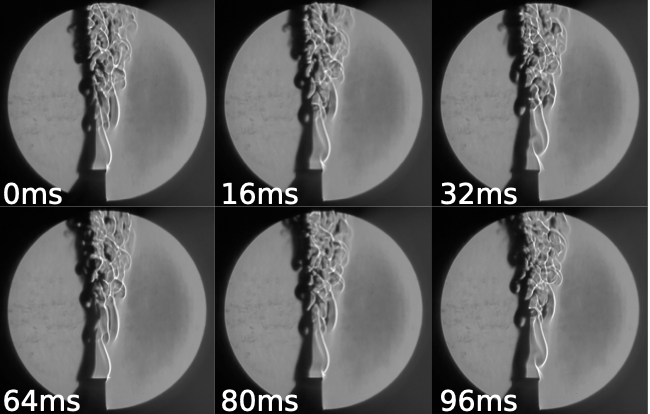 In a previously reported study, first year Ph.D. student Attila Gergely from the Physics Department, led by his supervisor and other researchers from the Babes-Bolyai University (UBB) discovered several interesting phenomena while studying and modeling oscillations and collective behavior of diffusive flames. These experiments were made using the flame of candle bundles. Their homemade experimental apparatus revealed many fascinating scaling laws for the oscillation frequency of the flame as a function of relevant physical parameters. Synchronization phenomena of nearby flames were also studied.  A simple dynamic system model describing the coupled time-evolution of the temperature and oxygen concentration inside the flame offered an elegant model, capturing all the experimental results. It is known however that very similar oscillations are observable in convective flows as well. Recently, the same team from UBB came up with a hypothesis according to which not the burning process in the candles is responsible for the observed oscillations and collective behavior, but instead one should look for the answer in the convective upward flow generated by the flame. In order to confirm this, a thorough experimental and theoretical study had to be done, visualizing and studying different type of convective flows in gases. Using the Schlieren technique for visualization of the controlled flow of Helium and heated air, the characteristics of the oscillations and instabilities forming in the convective flows were studied. The very recent study published in the leading fluid dynamics journal “Physics of Fluids” [1] revealed astonishing similarities with the phenomena observed in candled flames.  A simple model based only on elementary fluid dynamics was also elaborated, describing qualitatively well the experimental results. According to this new result, one gets a totally new perspective on many oscillating phenomena leading to intriguing collective behavior in flow processes. A video-abstract presenting in a science-popularization manner this study is also available on YouTube.